After having been building PC’s for over 15 years you think you’ve seen it all, you know dead hard drive, psu that have blown up, fried motherboard and even bent cpu pins etc.. you get the idea but nothing but caught me off guard more than an ATX 12v CPU extension cable..

The humble cable with all the power that surges through it’s veins, who would have ever though it would melt under what would seem like normal operations. 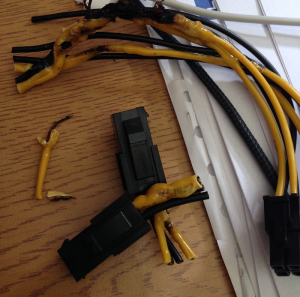 So i ran the cable through the underside of the case, have a glass side panel i like PC internal to have nice aesthetics..

Everything seems to run fine for a few days when suddenly the PC began randomly shutting down or freezing.. it was puzzling to say the least.

Ran all sorts of diagnostics software, bios updates etc.. couldn’t figure out what was going on, so decided to open pc case and examine all the cables when i horrifyingly discovered the ATX extension cable had melted to cinder!